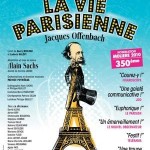 Co-produced by Alain Sachs and the Théâtre Antoine, Paris. Directed by Alain Sachs. Musical Director: Patrice Peyrieras.
Performed at the Théâtre Antoine for two seasons. National French tour plus Switzerland and Belgium and then reprise at the Théâtre de Paris. Nominated « Best Musical » at the Molière Awards in 2010. I played the rôle of the Baroness de Gondremarck, the Swedish aristocrat visiting Paris. And I also played the flute throughout the show as well.

Some excerpts for your perusal :

And an interview with the show’s director, Alain Sachs (who looks remarkably like Offenbach himself…) during rehearsals :